Our final visit was with Syalom, in eastern Indonesia. She is reported to be 11 1/2 years old, but appeared a bit older, maybe 13. Records of ages aren’t accurate in some of these countries and people just don’t keep close track. Kids aren’t slotted to grades in school based on age but rather on ability. Many of the kids either start late or don’t go straight through. So you get a mix of ages in a grade.

Syalom lives with her mother and stepfather. They’re in a 4-room house. It was 3, but more on that later. They’ve got bare-bones electricity and running water.

We met Syalom at her school. We paraded into the classroom and pulled her out (see previous post, At the School…). Luckily they were expecting us, so no kidnapping charges. But it really made Syalom the celebrity around the school. This center had a group visit once before, but never an individual, such as this visit.

Syalom is one of the kids who had asked Ginger to visit. She’d asked several times in her letters if Ginger ever came to Indonesia. It is fairly common that the kids (and many adults) don’t really have a clue how big the world is and what it takes to get around. But persistence paid off.

We proceeded to Syalom’s home where her parents were waiting.

And her stepfather, putting on his new watch:

The view below is from the street in front of the home. The two girls had just walked by. And got candy for their trouble.

This is the view in the other direction. They are in a town with a mixture between lower and middle classes. You can see in the picture that their neighbor has a walled, gated home, with an at least partially paved driveway. And Syalom’s family seems to have a little more disposable income than some others we’ve visited.

As is common, the neighbors wanted to get in on the action.

After the home visit, we returned to the church/center. They had arranged a large lunch for us and a musical performance.

The food is a common denominator in these visits. The family often will serve us food. And the center often will, as well. We tend to get a mixture of home-cooked and storebought stuff. Soda is often a purchased luxury item for the visits. And a whole variety of local foods.

This was the final kid visit for this trip. Between this trip and going to Africa two years ago, we’ve now done 17 child visits in 8 different countries. Each one is unique and memorable. No two kids are the same. The families and situations are different. The centers are different. And each visit seems to have some hidden wonder in it.

But there are a few themes that run through all of the visits. The main common thread, of course, is Ginger.

She works hard on the relationships, letter writing, and keeping up with the family situations. Whether it is with Abby, whom Ginger has supported and corresponded with for about 5 years, or Charissa Beth, whom Ginger has only supported long enough to send one letter before the visit.

One other theme is that Ginger has typically provided family gifts to the families of the kids she supports. It is often about $100, sometimes a bit more. Not a huge amount to us. Sometimes we find out, in detail, what they purchased. And sometimes the information doesn’t get passed on. In Syalom’s case, no information had been passed on. We got to the part of the visit where they were going to serve us food. The plan was for Syalom, herself, to cook a simple dish for us. So the entire party, including neighbors, adjourned to the newly added fourth room of the home: the kitchen.

It had been added onto the back of the house, using a family gift we’d provided. It is great to see how such a small sacrifice from us can have a great impact on others.

It is common for the families to show us what our gifts have provided, when we visit. We’ve seen a water faucet and house addition in Rwanda; met a donkey in Burkina Faso; seen the land purchase in Uganda that restored a fatherless boy’s status in the village; been given report cards for kids who have been sent to school; and been given shirts sewn by a disabled boy who got tailoring equipment and training in Burkina. And now a room addition–a formerly outdoor kitchen moved inside.

Another common theme is that, through the letters, our family becomes a part of theirs. Below is a framed picture of Ginger and me from Africa, which Ginger sent to Syalom in an online letter. They had it printed in 8 x 10, framed, and was one of the few pictures hanging on the wall of their living room. (The picture in the corner is our son, Cameron, holding his cousin’s daughter.) Syalom’s grandfather asked me (through an interpreter) how my new job was going, recalling I’d started with my company a short time after Ginger started supporting Syalom.

The other common theme is the strength of the relationships developed with people other than the child. One place this happens is with the translators in the center who translate the letters back and forth. They read everything and tend to feel pretty invested in the relationships.

But the strongest relationship tends to be with the child’s mother (grandmother, aunt, whoever is taking care of them). These are deep, often unspoken, and very emotional meetings. The look in a mother’s eyes on one of these visits can make the whole trip worthwhile.

And, of course, with the child. 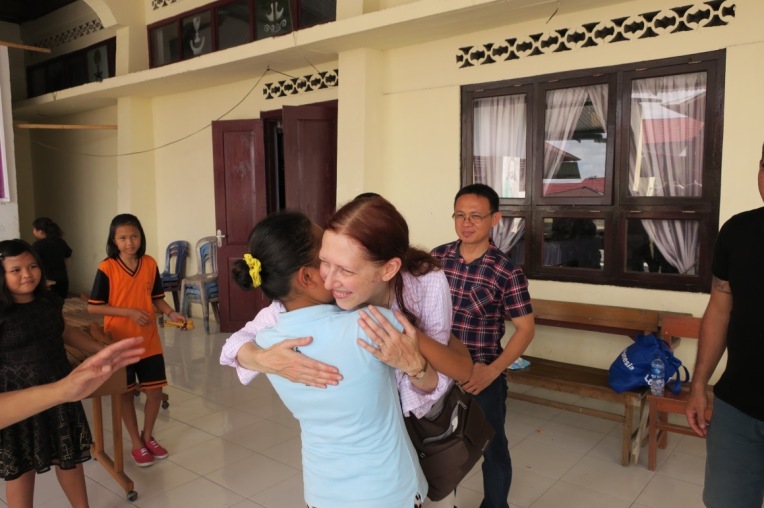