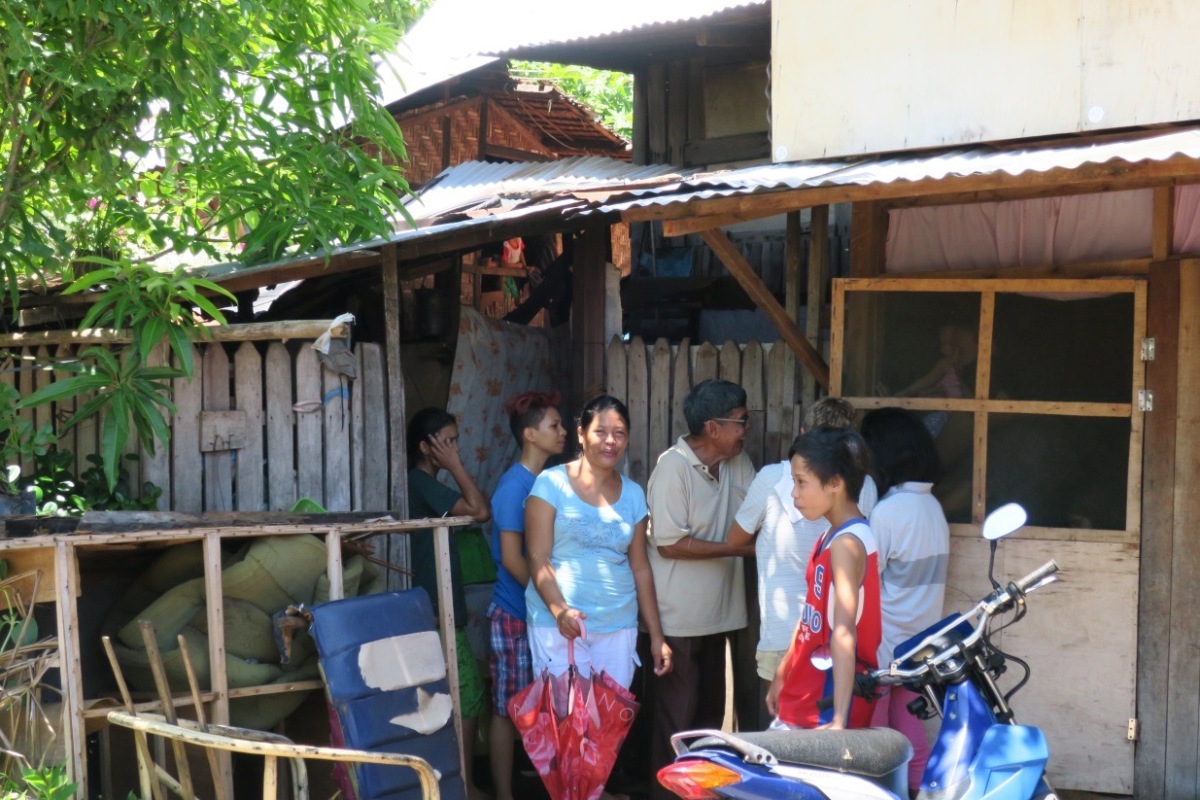 We made the trip in late July to the southern island of Mindanao to visit Kurt. He’s a very sweet 13 year old. He lives with his grandparents and two siblings in what is probably a three-room home. The living/dining room is far from weather-tight. It is pretty much open air – more like a sheltered porch. No running water. There is electricity in the neighborhood, but I didn’t see any in the home. 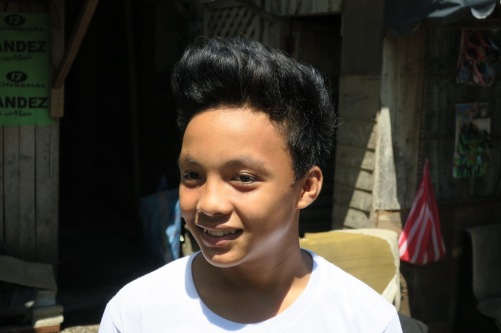 On the electricity topic, we’ve found that if the family or a neighbor has TV, they will turn it on for what I believe is our benefit. It’s a status thing. Even though they are completely engrossed with us, they will make sure we see that they have a working TV.

Kurt presented us with leis when we arrived. The street was well-populated when we got there. Many of them, as it turns out, were there to see us. Word often travels fast when visitors show up in the neighborhood. Especially visitors from so far away as the US. The entire time we were on the island, we saw two other whites – one of those at the airport. So we do attract attention.

We were ushered into the home, where we sat and talked a bit. I went out to the van to get the large rolling duffel bag of gifts for the family. As soon as the bag came out and I started carrying it in, a collective gasp and increase in the street conversation level erupted.

Below are Kurt’s grandparents. We presented the grandfather with a watch. He was beaming! He actually kissed it! I had to help him set the time. I doubt he’d ever had a watch before.

Kurt described him to Ginger: “He’s a very good man.” High praise from a 13-year-old. 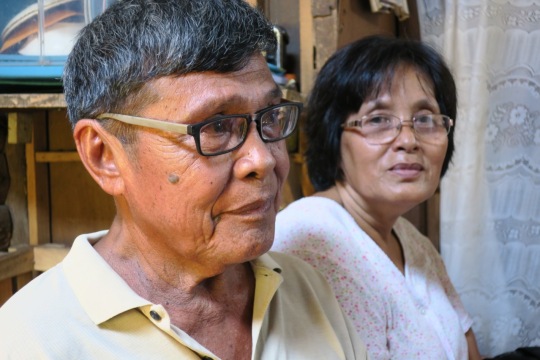 As soon as we went in the home, the neighbors filled the doorway. They insisted on seeing what was going on. We were in the living room. On one shared wall, there was only a net between the top of the wall and the roof – a space of a couple feet at the roof peak. Faces were typically seen through the net, checking out the goings-on. On the other side, the neighboring home has a wall of woven mats. Kurt’s home only has a sheet hung up. So the upstairs neighbors, who have both a window and a hole in the mats, were also checking us out the whole time. Plus the constant crowd in the door, as seen in the picture below. 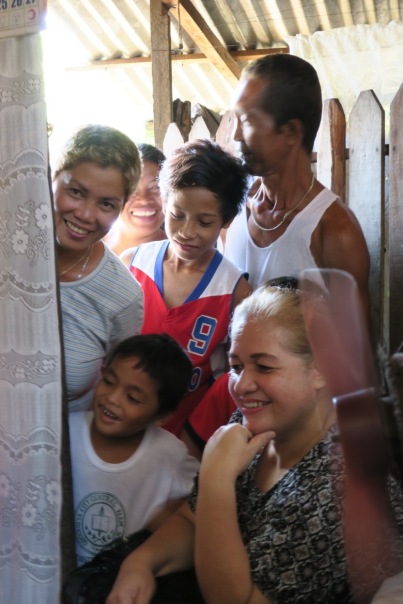 Below is a picture of the home. The hinged screen door belongs to the home on the right of Kurt’s. The picket fence-type walls are Kurt’s. The woven mat walls in the background are the neighbors on the left. Very simple.

The people crowded around Kurt’s grandfather are neighbors and other well-wishers. It kind of emphasized that when visitors (like us) come to the home, not only are we a novelty but the family we’re visiting are celebrities. 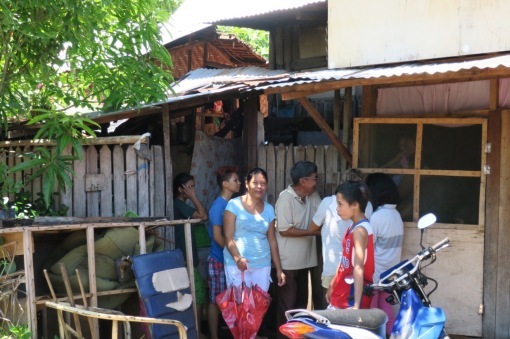 Below is the street where Kurt lives. You can see one of the tricycle taxis in the foreground. The gold van that looks out of place is our ride. The clotheslines appear to be communal. We saw women washing clothes by hand in washtubs. 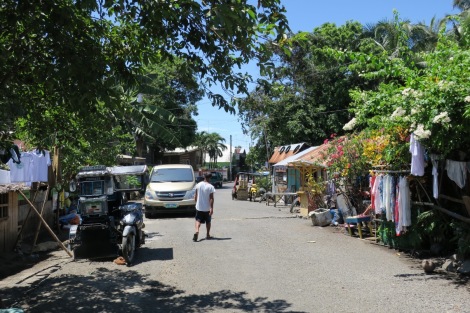 We took the family to lunch. It was a group of 14. Two from the US, Kurt, his grandparents, his two siblings, our guide, two people from the center, the church bus driver (who also is a relative of the family), our driver and our two bodyguards. We had more food than we could possibly eat, for $55, including a generous tip. We typically will over-order on purpose for these meals, then send the leftovers home with the family.

Language is typically a barrier at meals like this, but you can speak and hear volumes through eye contact and gestures.

The Philippines has something like 111 different dialects. Finding a common ground among the locals can be difficult. This area of Mindanao has its own dialect. One bodyguard was fluent in it. The other guard and our guide were conversant. And English was often spoken for our benefit. But everyone would switch to other languages when they felt like it.

These trips tend to reinforce for me the very provincial views prevalent in the US regarding language. I find it somewhat embarrassing that I travel to these places with “inferior” education systems and people speak multiple languages. While I speak only one. 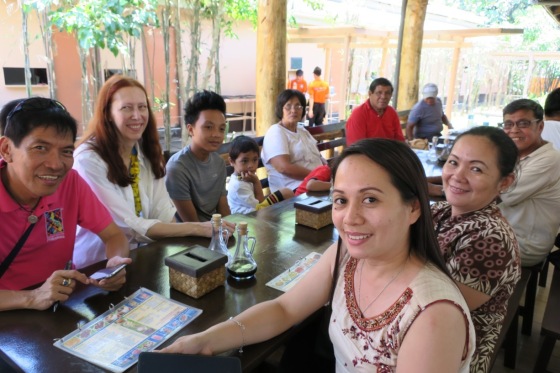 The two guys who look like cops are our bodyguards. They were great. Bob (Ginger’s guard) is on the left. Gerald (mine) is on the right. They very much got into what we were doing and expressed their appreciation for what Ginger is doing for the children of the Philippines. We get this reaction pretty regularly, that the people we hire to accompany us become part of the event. It is very true of our guides, as I’ve mentioned. What starts as a relationship between the child and Ginger, evolves into a community relationship and the visits turn into quite the event. 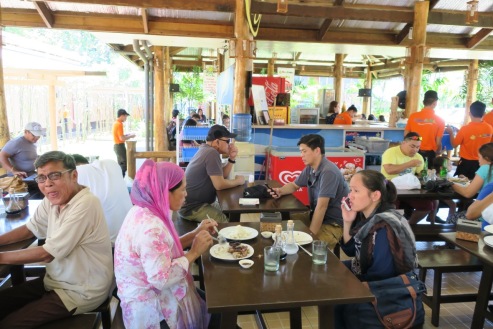 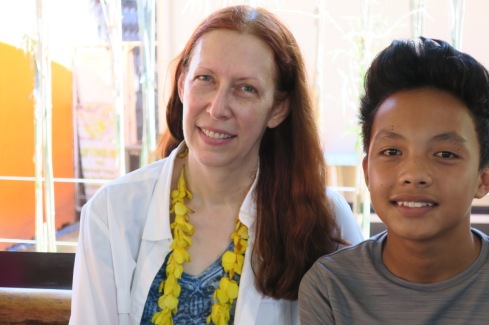