In mid-July we visited Alnasher. He is 8 years old and lives near Baguio City, which is several hours’ drive north of Manila, in the mountains.

Below is a street scene from the general area where he lives. The houses are built on the side of the mountains, so many side roads are very steep. There are also lots of little paths one must take to get to the homes. I particularly like the colors and jumbled mass of buildings.

Most houses have minimalist electricity. Running water is rare in Alnasher’s neighborhood. Although they have toilets and sewers of some sort, the toilet is “flushed” by manually pouring water into the toilet by dipping a bucket in a nearby barrel. Alnasher’s home had, at most, one bare bulb per room for electricity.

Below is the path to the home. No one in the area has a car, so the path doesn’t need to be wide enough for that. Just walking. 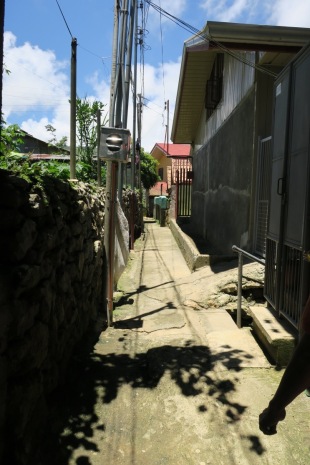 We were greeted at the door by Alnasher (left) and his little brother. Welcome signs had been made and were given to us. Getting signs and greetings like this are one of our favorite parts of the trip. 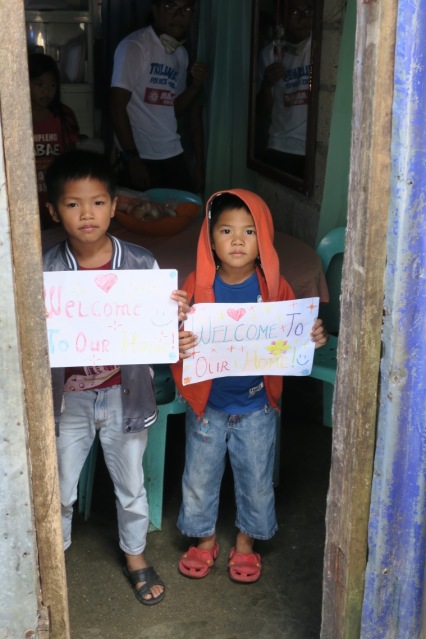 Alnasher has 6 siblings. They live with their grandparents. They used to live in the province of Mindanao – in a war zone area – but moved for safety. Their parents stayed in Mindanao. (We head to Mindanao Monday.) The children used to have to literally duck the gunfire. A few of them have fairly clear symptoms of PTSD – extreme reactions to loud noises, etc. They’ve been in Baguio for a little over 4 years. Only the youngest boy doesn’t remember it. We’re unsure if the parents are still alive.

They live in, as best we can tell, 4 rooms, plus the “powder room”. One kitchen/living room/dining room and 3 bedrooms. For 9 of them. Their grandfather works for tips as a porter for a bus line. No salary or benefits. The average income in Baguio, we were told, is about $4.35 a day. I’m confident tips from a bus station are lower than that by a ways. The grandmother doesn’t work outside the home.

Below is the family, with Ginger. The grandfather is at work. The boy on the left with his head bowed was very quiet the whole time. He has an untreated tooth issue that was swollen and causing lots of pain. 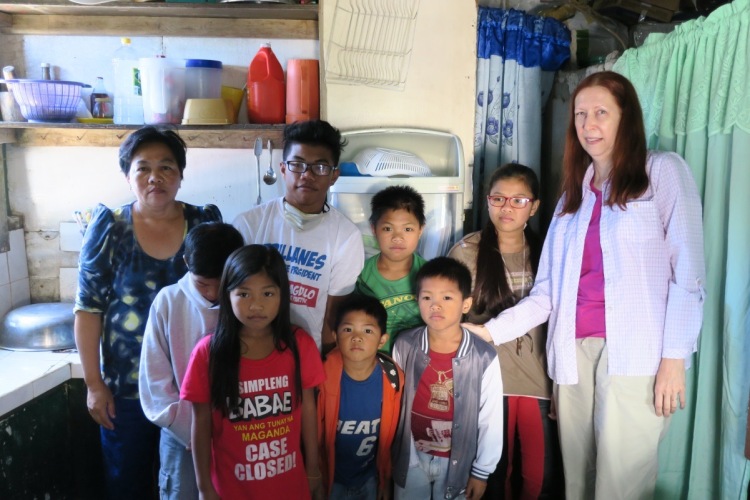 At least 5 of the children in the family are sponsored through the His Hands organization. The project director and a second volunteer accompanied us on the trip. All might be sponsored, but we got proof of at least 4 in addition to Alnasher. This keeps them in school, primarily. The public schools are “free” tuition, but charge other fees. The sponsorship pays the other fees, primarily.

The project director collects letters sent to the kids, along with gifts sent, and distributes them once a quarter. Typically the families have to pick this stuff up. But the director agreed to bring this quarter’s delivery by their home, since they were coming to the home with us. Included in the quarter’s mail call was a package for the younger girl, but no letter. And one letter each for 3 of the older kids. They were given the letters and immediately retired outside to read them in “privacy”. They were out there quite a while. They read the letters repeatedly, and later traded letters to read each other’s. They were so engrossed in the letters that they didn’t even look up when I started snapping pictures. Pretty amazing. It also shows the extreme value these letters from the sponsors have for the children. The kids hang on every word. Reading the letters was more important than hanging out with visitors, including two from the US.

The below pic is, in my humble opinion, an early front-runner for “best picture of the trip”. She’d been reading for close to 10 minutes by this time. As I said, she had to have read it multiple times. She was completely absorbed in it. Her little brother, who was a hoot, was playing with multiple kaleidoscopes at once, sitting in the doorway.

We learned that along with the PTSD symptoms, several of the children have been moved to a different school than the closest one, due to bullying. In their case, it is because they have Arabic/Muslim-sounding names. The family is Christian.

They are being bullied so badly – by presumably Christian children – over mistaken beliefs that they are Muslim that they had to change schools. It was heartbreaking to hear about. All of this was new to us. It didn’t come up in letters, which are largely written for them by their grandmother. Their pastor has gone to the school, verifying that they attend his church to try to curtail this. But it didn’t help.

The next picture is from their front stoop. I pulled the camera out because it’s a beautiful view. The homes below, with the tin roof, shoes, and clothes drying add color and context. The more I looked at it, the more I saw a visual symbol for rising above the grinding poverty all around and escaping to the beautiful lands of plenty beyond.

I’ve used the metaphor that when we pull up in our vehicle for these visits, it’s like the circus has come to town. Half the village/neighborhood knows we’re coming. The other half knows as soon as we’re there. So it is rare that we DON’T have neighbors coming over to see what is happening. We always carry extra candy and toys for the neighborhood kids. 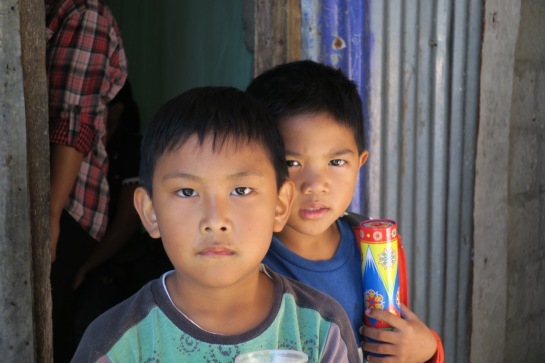 In this case, the boy in green hung out for a couple hours – never setting foot inside the house. This phenomenon was far greater in Africa than it’s been in the Philippines.