As Bryan mentioned, for the Baguio City children (sponsored through His Hands Support Ministries), logistics required us to visit both on the same day. 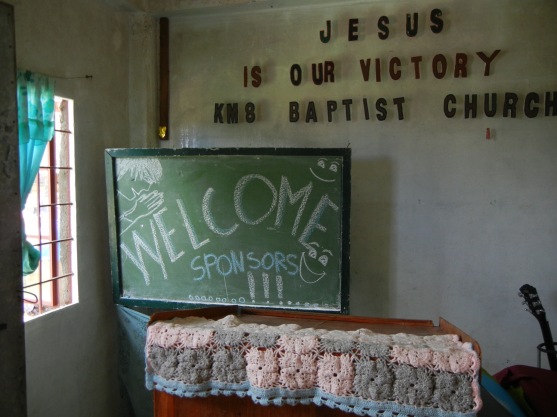 Charissa Beth (or Charissabeth, I’ve seen it written both ways) is a new child for me. One of the requirements of the local group is that the child needs to attend one of the partner churches. Lack of church attendance is the most common reason for a child to leave the sponsoring relationship, which is what happened with the 2 previous girls I’ve helped.

Even though (like many sponsors) I usually like to choose the children myself, I’ve been pleasantly surprised when I let the assignment happen more randomly. Charissa Beth is part of a loving family, yet because of her father’s pastoral role in this extremely needy setting, they struggle to make ends meet.

During the visit I was struck by Charissa Beth’s sweetness–especially her loving card (see Bryan’s post). Wow! I was deeply touched.

I’ve noticed the greater level of confidence that kids display when they have loving parents, and especially a loving father, in the home. The parents’ devotion was very evident, and wonderful to see.

With this visit, I felt great joy in being able to give to the parents. I had a watch for the father, who immediately responded that it was an answer to his prayers. He has a prison ministry and has time limits to observe when visiting the prisoners, but had no way to keep track of his time. Now he does!

In the photo above, Charissabeth’s mother is wearing a necklace that I gave her. I was amused later because I’d brought a Hello Kitty watch, thinking it would go to the sister. However, the sister was already wearing a watch (perhaps from her own sponsor?), and so it went to the Mom. She was absolutely thrilled!

A couple of notes from Bryan’s post: the nearby home for the blind is privately run, not sponsored by the government. And though we laughed about Bryan being asked his age by a teenager, that question was posed to both of us multiple times by a variety of people. It seems to be a common ice-breaking question in the Philippines, similar to “what do you do?” here. They’re not as phobic about aging as we are, and elders are deeply respected, so it would seem the higher the number, the better! (I approve!!) 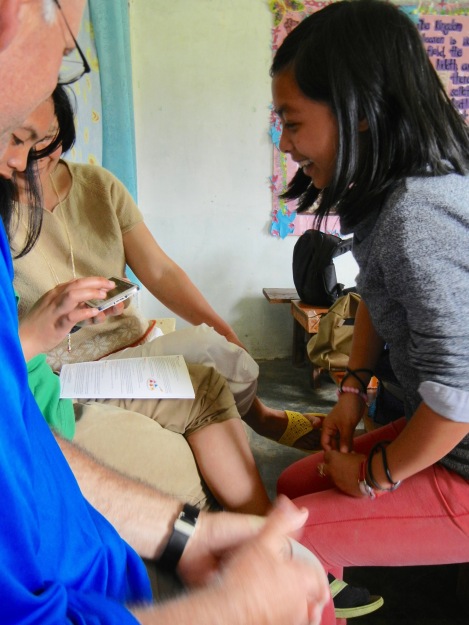 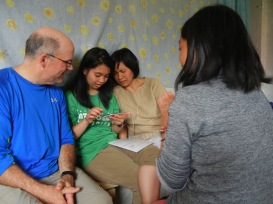 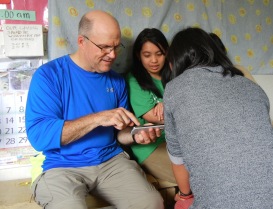 In these pix, Bryan was describing my artwork to Charissa Beth, her mother and sister. They’re paging through the photos on my phone. The sister is an artist too and wanted to look at every image, zooming in on many to see details and making lots of comments.

Finally, this visit held what for me was the spiritual high point of the trip. At the end of our time together, the father prayed for us all in Tagalog. Though I couldn’t understand a word, through this pastor’s passionate tone I felt the Spirit move and was reminded of our common ground across so many enormous differences of culture and geography. That moment sums up why I feel it’s worth making such a long trip. The sponsorship fees help meet practical needs, the letters add another layer to the relationship; but the visits help us remember we’re not alone.